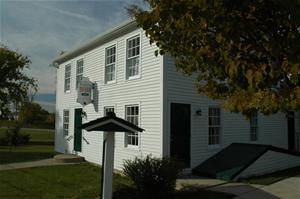 The Warren Tavern is operated by a group of volunteer residents called the Warren Tavern Preservationist. The Tavern is located at 3S540 Second Street and its mailing address is P.O. Box 17, Warrenville, IL 60555.

The Warren Tavern Museum was built in 1838 as a hotel. The Founder of Warrenville, "Colonel" Julius Morton Warren, built this historic landmark of DuPage County.

"…[Colonel Warren] built a fine hotel and spacious hall in it for dancing. It was patronized by the elite of Chicago as well as Naperville and the Fox River towns, and here it was that John Wentworth made his debut into social circles…no more refined and truly aesthetic circles than these dancing and private parties have ever graced the elegant drawing room of even Chicago since that eventful period"

Rufus Blanchard History of DuPage County (1882) With the owners slating the landmark for demolition in 1991, a group of volunteers banded together to form the Warren Tavern Preservationists, Inc., to assume the responsibility of; relocating, restoring, maintaining, and interpreting the 1838 Warren Tavern-Hotel. On October 7, 1992, the landmark made a triumphal journey to its new home on Second Street, in the designated Historical Park arranged for by the City of Warrenville.

Today, the Warren Tavern Museum is located one block north west of the Warrenville and Winfield Road intersection, adjacent to the Albright Studio, which houses the Warrenville City Museum. The Tavern is still managed by Warren Tavern Preservationist volunteers and is available to rent for social events. This building is suitable for small functions such as, wedding showers, birthday parties, family gatherings, organization or club meetings, craft sales, lectures and much more. To view the Tavern or to arrange for rental contact, Carla Kibler at (630) 393-4001.