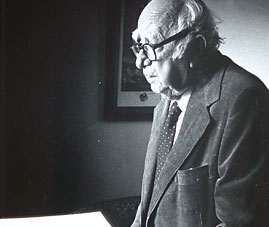 It was inevitable that Warrenville's tranquil beauty would attract artists. Celebrated oil painter, Adam Albright moved to the town in 1924, with his wife and three sons. He was known for his large canvases, picturing young children in sunny outdoor settings. For models, he used his three children and later many of the youngsters in Warrenville.

Ivan Albright had no interest in his father's impressionistic style. He became a pioneer in the field of "magic realism," a style that portrayed a very graphic view of human mortality. Like his father, many of his models were Warrenville residents. His best-known work was The Picture of Dorian Gray, painted for the motion picture of the same name released in 1945.

Ivan's last visit to Warrenville in 1978 was wonderful. The City declared Ivan Albright Day and a full day of festivities was planned. Ivan, being a friendly fun-loving man, charmed everyone.

On the 100th anniversary of Ivan Albright's birth, February 20, 1997, the Art Institute of Chicago opened a major show of his work. Appears the Man, a photograph of Ivan Albright and his most famous work, The Picture of Dorian Gray, can be found in the Warrenville Gallery located at Warrenville's City Hall.