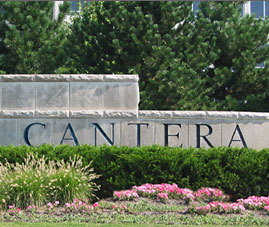 Cantera is a bustling business, residential, entertainment, and retail mecca anchoring the nationally recognized research and development corridor that runs through DuPage County. Before the highly successful TIF redevelopment, it was a limestone quarry and concrete batch plant located on 650-acres in Warrenville, where the quarry operated from the 1950's to the early 1990's. The land was severely scarred by the mining operations and lacked any significant public infrastructure improvements prior to being redeveloped into the mixed-use, master-planned development.

In 1986, the City of Warrenville established TIF District #1 to help pay for the costs of redeveloping the nearly one-square mile quarry. In 1994, through a unique and cooperative public/private partnership with Warrenville Development Limited Partnership (WDLP), the Cantera developer, and the use of Tax Increment Financing (TIF), the City worked diligently to transform approximately one-fifth of its total land area into the world-class, revenue-generating, mixed-use Cantera Development. This transformation involved installation of underground sewer and water lines, expansion of a sanitary sewage treatment plant, construction of new wells and water storage facilities, a network of storm water management detention ponds, new arterial roads, the Winfield Road/I-88 interchange, and the installation of a network of pedestrian paths and trails. With TIF revenue and WDLP investment, more than $57 million in new public infrastructure improvements were constructed to serve the Cantera project.

The Cantera tax base produces approximately $9.5 million in property tax revenue annually for all taxing bodies, a jump from $7,347 in the late 1980s. The project has provided a large property tax revenue windfall to the overlapping taxing districts, and doubling the City's EAV. The development has provided 95% of the capital TIF funds to construct the public buildings, parks, and playgrounds. The highly-successful development enabled the City to eliminate administratively burdensome revenue-generating user fees such as vehicle stickers, and helped the City maintain the lowest water rates in DuPage County. The massive amount of construction also provided a strong and steady stream of revenue in the form of building permits and water and sewer connection fees, which helped support the City's utility enterprise fund.

Cantera offers many amenities to Warrenville residents and citizens of surrounding communities alike. It is a place of business, commerce, and entertainment. It provides a destination for people to work and play without disrupting the peaceful, friendly, small-town community environment that Warrenville residents cherish.

For more information about the Cantera Development contact the Community Development Department at (630) 393-9050.